The dangers of carbon monoxide (CO) cannot be overstated. It is known as the silent killer for good reason, and the vast majority of households contain the means to produce this colourless, odourless gas. Luckily there is a way to protect your family against this threat.

Carbon monoxide is produced as the result of ‘incomplete combustion’ of any fossil fuels. This could be due to lack of sufficient oxygen or when a flame has nearly died down. Take the embers of a dying fire as one example. The coal or wood is still burning, but in a way that leads to a much greater quantity of the lethal carbon monoxide being produced. The effects can be amplified if there is a blockage in the chimney, as this will prevent the CO from escaping the room and allow the concentration to build up rapidly. This is also the reason why almost extinct BBQs must never be moved into a tent or indoors, as tempting as the prospect of a little bit of extra warmth is!

Another potential source of CO can be a faulty gas boiler. An un-serviced or older boiler can spill low levels of CO (which can accumulate over time in the bloodstream) or leak large amounts of carbon monoxide if the flue is blocked, with concentrations of carbon monoxide reaching well over 800ppm (parts per million). At those levels or above, anyone inhaling the gas for even a short period of time is in immediate danger. Exposure to high levels of CO or longterm exposure to low level CO can lead to serious illness and even death.

It is impossible for humans to sense carbon monoxide, but the symptoms of acute poisoning are identifiable. A headache, nausea, dizziness and general drowsiness are amongst the warning signs that present themselves with CO poisoning. If you suffer from a combination of these effects, then move to fresh air as soon as possible. If you believe you are suffering from carbon monoxide poisoning, contact a doctor immediately.

With all of this in mind, the need to protect against CO is clear, and the only way to do this is by installing carbon monoxide detectors. There are a wide variety of makes and models available, with some offering enhanced features, such as digital displays or long life batteries. Domestic CO detectors should be kitemarked to BS EN50291-1, which defines the reaction times and technical requirements for dependable CO alarms. There is even a specific type of alarm designed for use on boats. CO alarms suitable for boat must conform to BS EN 50291-2 and in addition be marked explicitly as suitable for boats. 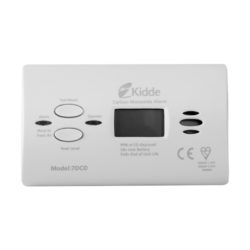 Both domestic and boat grade CO detectors are available with a choice of battery types. A detector featuring the afore mentioned long life battery is always a wise investment. Versions powered by removable batteries require periodic battery changes, whereas long life versions are available with lifespans of up to 10 years.

Top end carbon monoxide detectors may also offer a digital display, radio interconnection possibilities or combined CO and smoke detection. CO detectors feature a series of LED lights which indicate their status plus a test button. Digital displays offer much greater feedback about any carbon monoxide that is detected, such as an accurate reading of the specific concentration that triggered the alarm.

The correct placement of a CO detector is important. A good height for installation of a CO alarm is at eye level as it allows you to easily test and maintain the alarm. Wall spaces above or below window and doors should be avoided, as drafts can prevent the CO from reaching the detector. Most models advise to install the detector between one and three metres from any potential CO sources. To ensure absolute safety, it is advised to install a CO detector in every room with a potential CO source.

Once you have identified a location to install your alarm, test the alarm to make sure that the alarm signal is fully audible in the sleeping areas. When asleep, you are more vulnerable to CO poisoning as you might not be able to realise that you are starting to be unwell. Larger properties therefore can benefit greatly from installing a system of radio interlinked CO detectors that ensure the signal is raised across the whole network if any connected detector senses carbon monoxide.

Modern carbon monoxide detectors are highly dependable and reasonably priced. If you were to divide the purchase price of a CO detector by its expected lifespan, the price per year becomes minuscule. If you don’t have a carbon monoxide detector installed yet, then buy one straight away. If you do have one installed already, test it regularly to ensure you remain safe. CO poisoning can be deadly, but is easily avoidable.